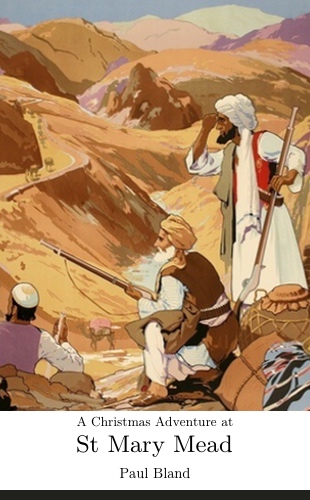 Here’s something a little different. I wanted to write a Christmas story away from the usual “Father Christmas in trouble – girls save the world” theme. I also wanted to follow up on the girls’ adventures after Brussels in A Time of Shadows and Shanghai in Ten Cents a Dance. I thought too that it might be time to give the Sherlock Holmes narrative a break; instead, I have left Mycroft Holmes in place, however,  but appropriated Jane Marple as the foil in this story. In true Post-Modern style, the worlds of Agatha Christie and Conan Doyle intersect seamlessly. These are imaginary worlds and do not belong to me, of course.

The spring for the story was the diary, however, and that does belong to me.  Douglas Morton, the young Australian corporal who writes the letter to his mother into the exercise book in the ANZAC Buffet was my grandfather. The details in the story are substantially correct: he volunteered as a child soldier, served at Gallipoli, contracted enteric fever there and was lucky to survive the evacuation from the peninsular. He convalesced in Gibraltar and England before going back into the conflict with the Australian forces to France where he was badly wounded. His mate, Eric, was with him through the conflict.

He wrote the diary letter for his mother in England after Gallipoli – just as in the story, Douglas omits the most interesting parts of the story – or at least, all the things that a modern reader might want to know. He says nothing about the horrors of war on the peninsular or the fear and filth that was the lot of soldiers in the Great War. All these things are airbrushed out; what remains is a sense of adventure, good mates together, a much loved captain,  a kindly chaplain and gentle nurses when he is sick or wounded.

Through a century, the diary moved between generations in my family. On the death of Douglas’s mother, the diary came back to him. It then passed to his son, [also Douglas] and on his death, to me. It was in a battered cardboard suitcase when I found it clearing up my uncle’s property with my cousin.  When I came to read it, I realised what an interesting treasure it was.

To my horror, the document began to disintegrate in my hands. I showed to my mother [Douglas’s daughter] and asked her permission to donate the book to the collection of the Australian War Memorial in Canberra. It will be presented to them in early November 2015.

I’m not very comfortable with the final draft of the story.  There are some good parts, I think, including the diary itself and the wonderful life of the ANZAC Buffet and its founder, Mrs Minnie Rattigan: surely one of the unsung heroes of the Australian civilian war effort. The principal male character is, however, a problem. William remains too much a passive victim in the story and he speaks without a steady, authentic voice.  I am also very conflicted about the presentation of sexual abuse hinted at in the text. The story telling technique is naïve and adult material is incongruent at one level. I’m hoping that the naïve style is actually a way of dealing with the dark matter of the story.  There is too much talking and not enough doing in this story. All the same, this has a value as story for my family. And there is the delicious irony of Katie and Emily saving Douglas’s diary from the wicked Colonel; Douglas is, of course, their great-great grandfather.

I have taken some liberties with my grandfather’s story and I should acknowledge these. In the story, Douglas is in London recovering from wounds in 1918. In fact, he was badly wounded in an engagement within the Battle of Pozieres in August 1916 and returned to Australia with the injuries described in the story in that year. After a restless year,  he managed to convince the Australian recruiting officers that he was fit for active service and volunteered to return to France in 1918. He was on a troop ship in Auckland harbour in November 1918 when the Armistice was signed – and remained there for some time as his ship was in quarantine for Spanish ‘flu.